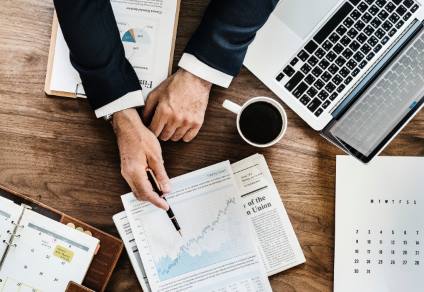 How To Choose Between Fixed and Variable Interest-Rate?

Many borrowers face the challenge of deciding between variable interest rate and the fixed interest rates. So, if you are not sure of the choice that you should opt for, our article will guide you on the two options, together with their pros and cons to help you make an informed decision. Both options are good, especially when applied correctly on different types of loans depending on the borrower’s preferences.

Fixed interest is an interest rate that does not fluctuate during the loan repayment period. It allows the borrower to make predictions on how they will make their future repayments.

You will be able to plan your finances better when using the fixed interest rate plan because you already know what to pay, and when to pay. You will also have proper budgeting.

As compared to the variable loan rates, you may end up paying more when using this plan. 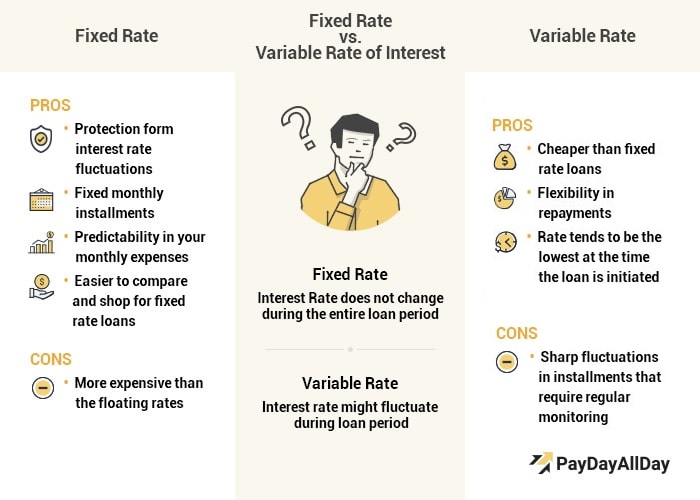 A variable interest rate for a loan is a rate which fluctuates over time. It is generally based on the market conditions as well as the benchmark index set but the federal authorities.

It means that the interest rates increases when the underlying index increases, and reduces when the overall index reduces. The underlying benchmark index primary depends on the loan type or the collateral given for the loan. Variable interest rates are ideal to the small households which do not have a consistent flow of income. They are also used in student loans and all types of loans which have a short repayment period.

Flexibility is the main asset in the variable interest rates plan. You don’t have to worry about getting penalties if you don’t deliver a defined set repayment amount. Additionally, you can decide to pay more if you have the money, and by so doing, you will settle your loan faster.

Lack of predictability is seen as a disadvantage as you can’t predict the future, and so you canâ€™t know what will happen tomorrow, and what you will pay. It often leads to poor planning. More to that, sometimes the interest rates can be higher than what you can afford.

Fixed interest rates have a constant loan repayment amount while the variable rates have fluctuating rates. For instance, if the borrower gets an adjustable rate loan, he or she will receive an introductory rate for a certain period, often for less than five years. Once that period elapses, the rates will start to fluctuate on a periodic basis as determined by the lender. 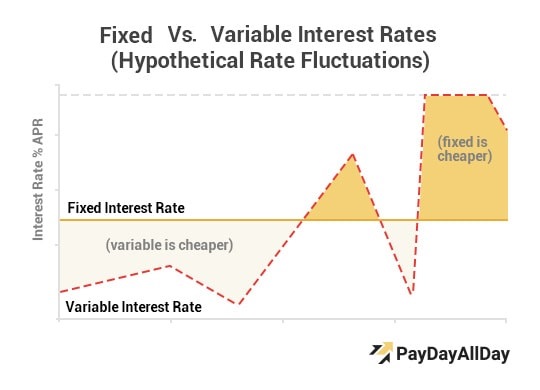 How To Choose Between The Fixed And Variable Interest Rate

Ultimately, both the fixed and the variable interest rates can favor you depending on your specific situation, and thus the decision is based on personal preferences. You should, however, base your decision on all factors discussed here. Before settling on a specific option, look at: If none of the presented option seems suitable for your specific situation, maybe it would make sense to consider a mixed interest rate (a semi-fixed one) that combines the advantages of both types of rates. The table below explains what are the particularities of such an option. While some lenders and financial advisors might advise you to use a specific rate depending on the market behavior, you should focus more on your repayment ability to avoid getting yourself in a bad financial situation. You should also carry out enough research to find out different lenders are offering, their terms and conditions, and their rates so that you can choose the best.